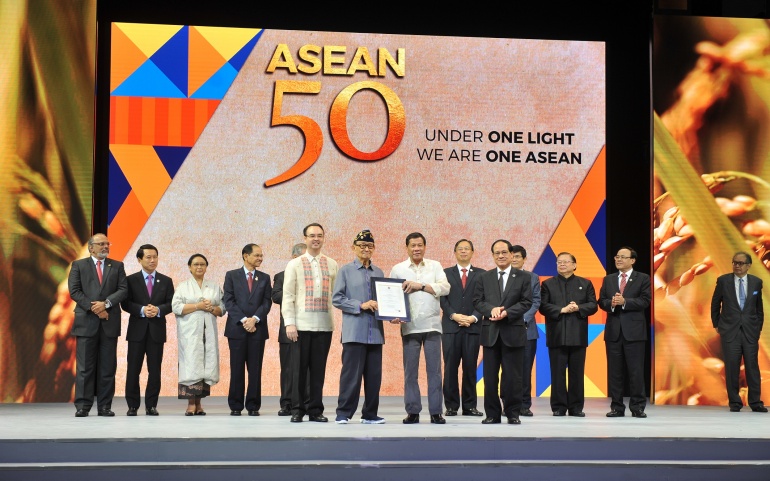 To mark this golden jubilee, various commemorative activities are being carried out across the region. A tribute to the five Founding Fathers at a grand celebration of the 50th anniversary of ASEAN is scheduled today in Manila, the Philippines – ASEAN’s Chair for 2017. ASEAN is also due to announce the ASEAN Social Youth Entrepreneurship Award and ASEAN Biodiversity Heroes Award to honour the contribution of youth entrepreneurs and biodiversity advocates to the advancement of ASEAN. National landmarks in Member States will also be lit up tonight in ASEAN colours to shine a light on this historic milestone.

After fifty years of cooperation, ASEAN has fostered deeper understanding, trust and partnership among its ten Member States, allowing them to pursue common goals amidst their diversity and in full recognition of their varied but shared interests and aspirations.

ASEAN’s most important achievement is the maintenance of peace and stability in Southeast Asia by promoting peaceful co-existence, friendly relations and pacific settlement of disputes among regional countries. To ensure a comprehensive security approach, ASEAN has stepped up regional cooperation in addressing non-traditional security challenges such as transnational crime, terrorism, disaster management, drugs and pandemic diseases, among others.

Further, ASEAN has deepened cooperation with external partners and interested parties. To date, 88 countries/organisations have appointed their Ambassadors to ASEAN. The number of non-ASEAN Contracting Parties to the Treaty of Amity and Cooperation has increased to 25.  Analysts say these increasing numbers and the growing requests to establish a formal partnership signify ASEAN’s increasing relevance, not only regionally but also globally.

With a combined current GDP of approximately US$2.6 trillion, ASEAN – collectively is the world’s sixth largest economy and Asia’s third largest. This achievement was enabled by ASEAN’s robust economic performance where the region has consistently outperformed global growth over the years. ASEAN is now the world’s 4th largest trade power house and a preferred investment destination.

“Moving forward with its Vision 2025, ASEAN’s effort in the next decade will be focused on realising a truly rules-based, resilient, people-oriented and people-centred community, playing more and more important roles in response as one to emerging regional and global challenges,” said Secretary-General of ASEAN Le Luong Minh.

The original article can be viewed on Asean.org