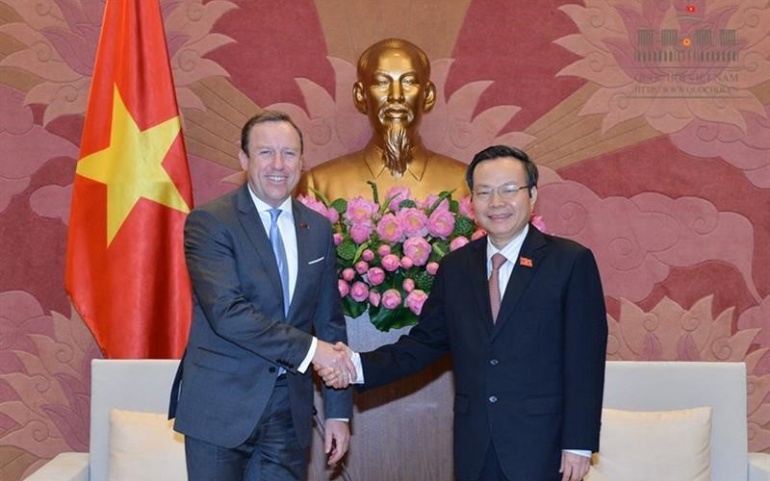 The National Assembly has a crucial role in decision making on the country’s socio-economic development objectives and policies, State laws and regulations. It also has a large bearing on Vietnam’s foreign policy, especially when it comes to signing and ratifying international treaties – in which the EU-Vietnam Free Trade Agreement (EVFTA) is included. While the EVFTA was one of the topics of meeting, the overall goal was to strenghten ties between EuroCham and the National Assembly, looking towards working together to improve the business environment in Vietnam.

Mr. Jens Ruebbert briefed the attendees on EuroCham’s core mission to support the European businesses community in its interaction with the Vietnamese Government, with a message of fostering more sustainable development and inclusive growth. Beyond the several regular dialogues with various public sector entities in Vietnam, EuroCham has recently intensified its cooperation with the Office of Government, including participating in many conferences organised by the Party’s Central Economic Commission and other. EuroCham’s recognition as a dialogue partner to the Vietnamese Government was recently recognised with its invitation to join the Advisory Council for Administrative Reform,  chaired by the Prime Minister. The Chamber’s work with provincial governments in matters related to trade and investment promotion and facilitation were also mentioned, namely those put forth by the Chamber’s Central Vietnam chapter (Da Nang, Thue Tien Hue and Quang Nam), and the soon to be launched Northeast chapter, based in Hai Phong.

Stressing the EVFTA and green growth as key topics in EuroCham’s action, Mr. Ruebbert shared EuroCham’s plans for its mission to the EU institutions in Brussels in early September 2017, whereby the delegation will discuss the ratification of the FTA and other sectoral issues. Representatives of EuroCham affiliated buiness associations (BAs) and SCs also shared their works and contributions to policy development. Mr. Rubbert expressed EuroCham’s hopes that the NA will support the entry of EU trade and investment into Vietnam and continue its efforts towards a friedly business environment.

Vice-Chairman Phung Quoc Hien expressed his appreciation for the positive development between Vietnam and the EU, especially after the establishment of the Partnership and Cooperation Framework of 01/10/2016, forming an important legal framework, bringing bilateral relations to a new stage.

Expressing his satisfaction at the increasing number of European businesses interested in the Vietnamese market, Vice Chairman Phung Quoc Hien stated that Vietnam is ready to create favorable conditions for European businesses to learn the market and envisage long-term business investment in Vietnam, especially in fields where Vietnam’s demand and European know-how complement one anotherl.

He also highly appreciates the scale and works efficiency of the EuroCham, especially through the support in making policies recommendations and preparation for signing and ratifying and Implementing the Vietnam-EU Free Trade Agreement in 2018. The EuroCham’s contributions to the policies and laws, regulations as well as Whitebook are well noticed by the National Assembly and Mr. Hien appreciates the sectoral contributions, especially in the Tax field. The National Assembly Vice-Chairman affirmed that the implementation of the Vietnam-EU free trade agreement after ratification will create new momentum and expand the potential of cooperation between Vietnam and the EU and EU Member States.

Vice-Chairman Hien expressed is belief that a current global protectionist tendency will be short lived, and that Vietnam needs to move forward towards a consolidated market economy. The European Business Community is expected to play an important part in deepening new trade and investment dynamics, linking the business communities of the two partners.

The National Assembly of Vietnam will in the near future consider passing many important laws and regulations to realise the provisions of the 2013 Constitution. The legal system serves the country’s needs in a new time of integration and Mr. Hien highlighted that the Committees of the NA are ready to cooperate with EuroCham in common areas of expertise, looking to work towards a legal framework that may facilitate European businesses to operate in Vietnam.

Mr. Jens Ruebbert thanked the Vice President of the National Assembly for the meeting and hopes that there will be more regulation meetings with also the Committees. He assessed that the EU and Vietnam had strong potential for development; re-affirmed that EuroCham will do its best to bridge and create favorable conditions for Vietnamese enterprises to operate in Europe especially in the current context, when the EVFTA will play an important role in Vietnam’s global trade integration.

This successful meeting follows a series of interactions between EuroCham and the national assembly. In 2014, EuroCham has already met with Vice-Chairwoman Ms. Nguyen Thi Kim Ngan and recently with Mr. Phung Quoc Hien at the Vietnam Economic Forum (Hanoi, June). The National Assembly has recently passed Resolution 43/2017/QH14 on intensifying the implementation of food safety regulations 2016-2020. In Session 12 taking place in August 2017, the NA will discuss 5 pending Laws: on the Protection of the State Secret; on the Protection and Development of Forests (amended); on the Provisional Measures before Lawsuit; Law amending; and supplementing the Law on Complaint, Law on Seafood (amended). The Assembly will also comment on 6 Laws: on Public Security; on Measurement and Maps; amending and supplementing the Law on Sport; on National Defense (amended); on Competition (supplemented); and on the Protection of the State Secret.

EuroCham calls all Business Associations, Sector Committees and members to work together and jintly with EuroCham advocate in regards to the relevant laws which may have an impact on their businesses.