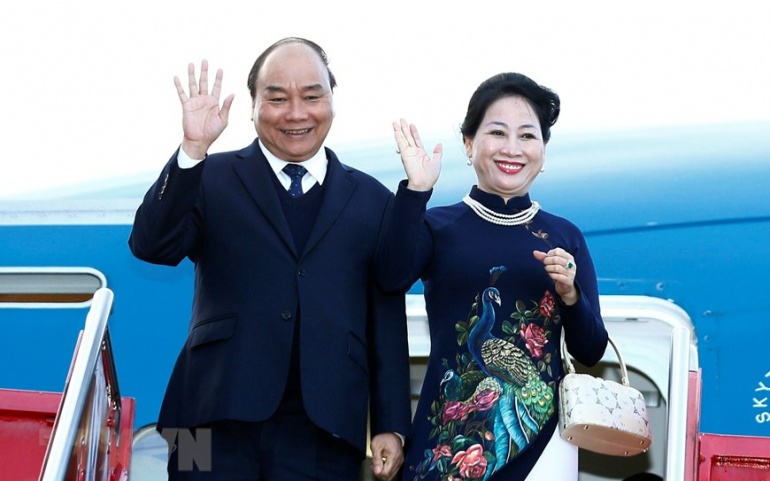 Vietnamese Prime Minister Nguyen Xuan Phuc has become the first premier of Vietnam to visit Norway in 20 years as both countries vow to boost ties.

PM Nguyen Xuan Phuc and his spouse paid an official visit to Norway from May 24-26 at the invitation of Norway’s Prime Minister Erna Solberg. The official visit to Norway by Vietnam Prime Minister Nguyen Xuan Phuc and his spouse looks to boost the traditional friendship and multi-dimensional cooperation, especially trade and investment, between the two countries.

While in Norway, PM Phuc held talks with host PM Erna Solberg, during which the two sides held that the bilateral trade and investment have yet to match their potential, and agreed to push for the early completion of the negotiations on the free trade agreement between Vietnam and the European Free Trade Association. The two PMs also exchanged ideas on the importance and the need to ensure peace and stability, and to maintain security, safety and freedom of navigation and overflight in the East Sea. All disputes should be settled through peaceful means in line with the international law, the UN Convention on the Law of the Sea 1982 and other related agreements of the region.

During the visit, PM Phuc also paid a courtesy call to the Norwegian King King Harald V of Norway. While expressing his pleasure to visit Norway, the Vietnamese leader spoke highly of achievements in all aspects made by Norwegian people under the reign of the King. King Harald V welcomed PM Phuc’s visit, and highly valued the results of the talks between the two Prime Ministers. He affirmed that the Norwegian royal family always supports comprehensive development of the friendship and cooperation between the two countries.

On the occasion, PM Phuc extended forwarded the invitation of Party General Secretary and President Nguyen Phu Trong to King Harald V to visit Vietnam again. The King accepted the invitation with pleasure.

Vietnamese Prime Minister Nguyen Xuan Phuc also had a meeting with President of the Norwegian Parliament Tone Troen on May 24 as part of his official visit to Norway. Both leaders expressed their delight at the positive development of relations between Vietnam and Norway as well as between the parliaments in particular over the years.

On May 25, Prime Minister Nguyen Xuan Phuc visited Pharmaq, a fish vaccine manufacturing company, and Kongsberg Marine Services Company. This is to promote the expansion of the marine economic cooperation between Vietnam and Norway, especially in fisheries development technology and sustainable ocean exploitation.