Prime Minister Nguyen Xuan Phuc and his spouse, along with a high-ranking delegation of the Government of Vietnam, paid official visits to the Kingdom of Norway from May 24-26, and the Kingdom of Sweden from May 26-28.

His visited to Norway from May 24-26 will affirm the strong relations between the two nations and help deepen the traditional friendship and develop bilateral co-operation in a more effective manner. This is the first visit by a Vietnamese PM to the northern European country since 1999.

While in Norway, PM Phuc held talks with host PM Erna Solberg, during which the two sides held that the bilateral trade and investment have yet to match their potential, and agreed to push for the early completion of the negotiations on the free trade agreement between Vietnam and the European Free Trade Association.

The two PMs also exchanged ideas on the importance and the need to ensure peace and stability, and to maintain security, safety and freedom of navigation and overflight in the East Sea. All disputes should be settled through peaceful means in line with the international law, the UN Convention on the Law of the Sea 1982 and other related agreements of the region.

During the visit, PM Phuc also paid a courtesy call to the Norwegian King and had a meeting with the head of the country’s parliament. He also attended the Vietnam – Norway Business Forum and affirmed that the Vietnamese Government always go along with Norwegian businesses. The leader received leading officials of Norway’s major groups. 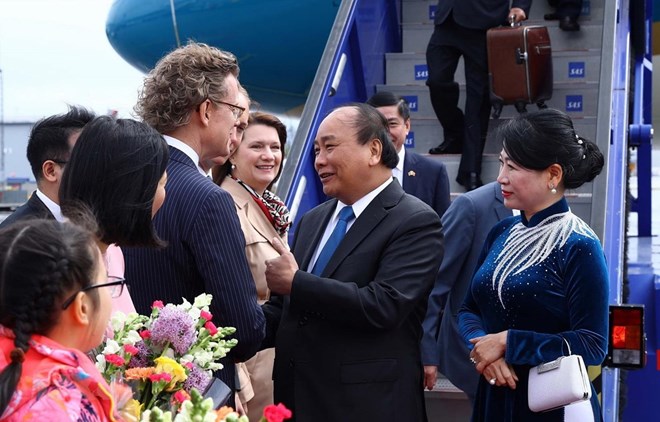 After Norway, PM Phúc has visited Sweden from May 26-28, asserting that Vietnam had attached importance to consolidating the friendship and traditional co-operation between the two countries in the past five decades. Notably, this is the first visit at a PM-level to Sweden in 20 years.

During the visit, PM Phuc is scheduled to hold talks with his host and pay a courtesy visit to the King of Sweden. He will join Swedish leaders in attending a Vietnam – Sweden business forum, and have working sessions with leading officials of a number of major economic groups of the country operating in Vietnam.

The Government leader will also meet Swedish diplomats, experts and friends and others on the occasion of the 50th anniversary of the establishment of the Vietnam – Sweden diplomatic relations